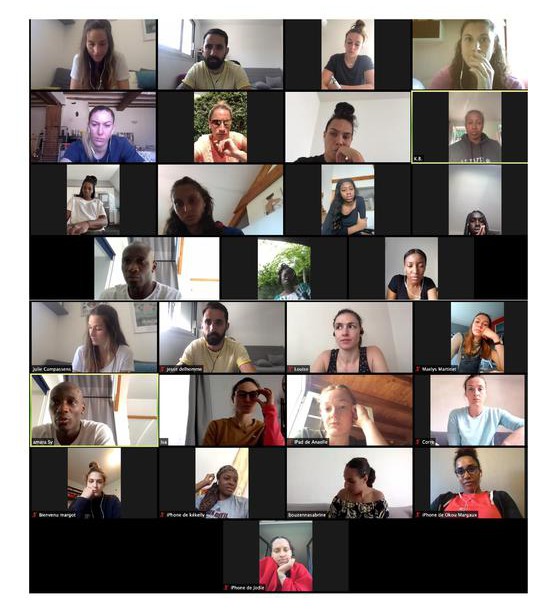 Like the LNB players, the LFB and LF2 players were consulted this Thursday, April 23, during a meeting chaired by SNB President Amara Sy. An essential time for discussion where each team was invited in turn to share their questions, their feelings and their concerns in the face of this health crisis. It also made it possible to present the steps taken by the SNB in ​​recent weeks and finally to expose the difficulties encountered. A mixed report …

The players first expressed their satisfaction at being able to collaborate today with the social partners of women’s basketball.

In fact, the SNB was able to count on the responsiveness of the UCLFB (Union of Clubs of the Women’s Basketball League) and the SCB (Syndicate of Coaches) who did not hesitate to respond favorably to the establishment of meetings information and exchanges.

Even if there is today a still new and fragile social dialogue in women’s basketball, the SNB wanted to favor the general interest and thus openly discuss the health, social, economic, legal, contractual or even sports consequences of this crisis.

Aware that there could be debates and disagreements, the partners still wanted to discuss in a transparent manner the shared concerns, the questions and the issues identified by each.

… but a noticeable absence of the FFBB / LFB

Despite several invitations from the social partners to the FFBB, the latter did not wish to take part in the discussions.

An absence that the players regret in view of the common difficulties encountered by all the players in this sport.

The LFB could however participate next week in a collective meeting organized by the UCLFB but only as an observer, as it wished to specify.

Among the questions that remain, the subject of health was raised massively by all the players present. As they approach deconfinement, they worry in particular about not having been sufficiently informed of health developments or even of the measures that the FFBB plans to take to ensure a safe return to sport.

Likewise, as main players in this sport, the players regret not having been asked and heard by the FFBB on all of the sports issues and consequences, which however concern them directly.

Remember that it was through a joint letter written with the UCLFB and the SCB that the SNB was able to finally make the voice of basketball players heard on this subject.

However, it is clear that no spontaneous approach has been initiated by the FFBB to know the position of the players on the future of their 2019-2020 championship.

However, a positive point: the FFBB has set up a “Competition” working group relating to the organization of the LFB calendar for next season with which the SNB has been associated.

The crisis seems to be indicative of a federal organization that is no longer adapted to the dynamic that the players want to instill.

Aware that they have a real role to play and a central place in the evolution of women’s basketball, they hope today that a close and lasting collaboration can exist between the FFBB and their union.

The players’ stated willingness to participate actively in federal activity and to be consulted on developments in their sport.

The next meeting is therefore taken next Wednesday for a meeting which should bring together all the social partners and one or more representatives of the FFBB-LFB.

previous
WIDE CONSULTATION WITH JEEP ELITE AND PRO B PLAYERS: HEALTH, A PRIORITY!
next
INFORMATION MEETING FOR NM1 REFERENTS