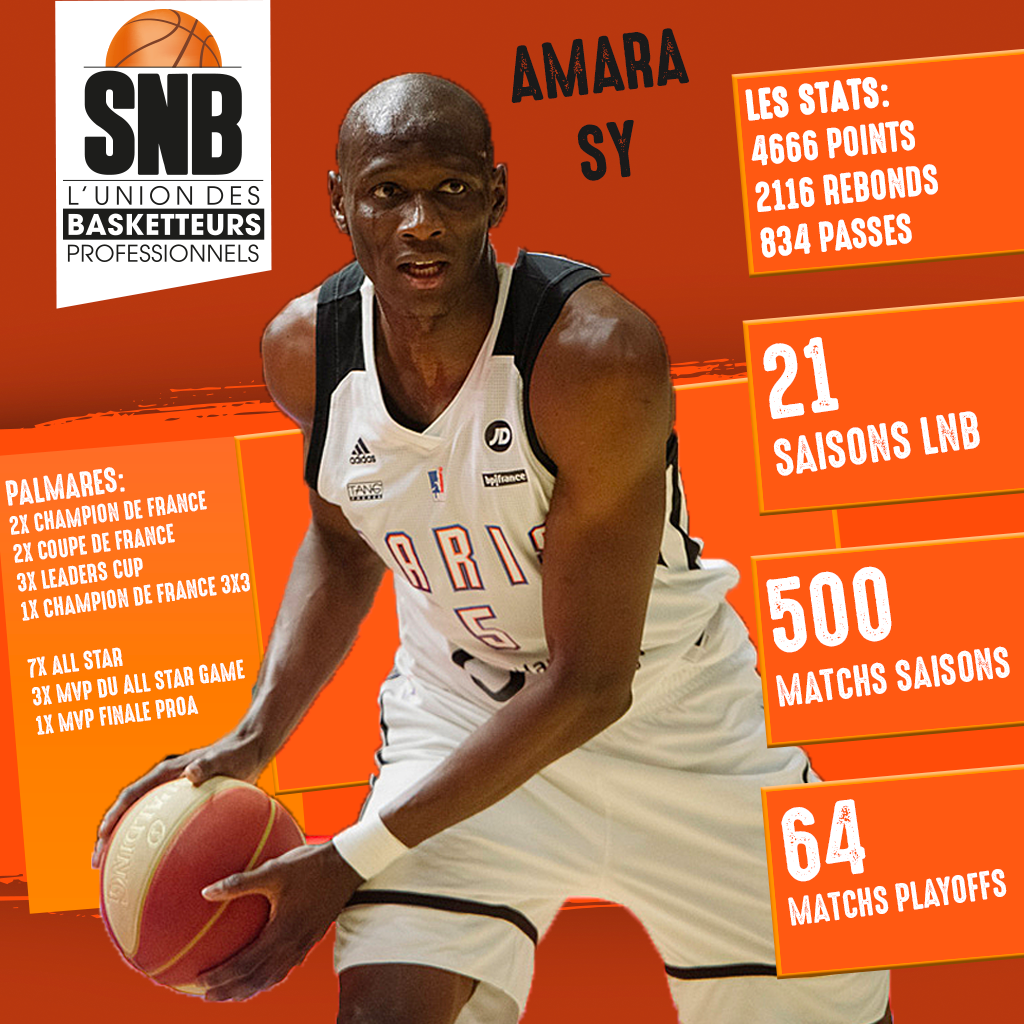 How are you doing since the announcement of the end of your professional basketball career?

I feel great! It was planned for 3 years now, since I arrived at Paris Basket. It’s not a sudden stop, I had it in mind for years so it was kind of planned.

Honestly, I am not even in acceptance because I know that I still have 2 or 3 years in my legs. Besides, my coach and my teammates spent the year telling me “Amara, why do you want to stop? You look like you’re 25” (laughs).

It’s not at all because I don’t like basketball as much, I love it! I don’t go two or three days without playing. We meet regularly at the Hoops Factory with other pro players.

A few days ago, I was playing there with Mathias Lessort, who asked me the same thing.

I just think that you have to know how to move on and I prefer to stop now, while I’m still good, rather than wait and stop when I’m disgusted.

I’m lucky enough to still be physically well. When I listen to the other players, whatever their level, I realize that a lot of them have pain when they wake up, have trouble walking, so I tell myself that I have to avoid that as long as I can.

I also have a lot of projects and it’s getting complicated to do everything at the same time, so it was the right time.

But, at the same time, I intend to continue playing. I still enjoy playing with my mates and I feel good so I don’t see why I would cut out completely.

After a long career like yours, 20 years if I’m not mistaken, do you have a memory that has particularly marked you or that you like to tell?

Frankly, this is a question I am often asked and I don’t know what to answer. The truth is that it changes all the time.

I think I would say my whole career. I had fun from the first time I stepped on the field until my last game.

As I said, I was playing a few days ago and I had a great time teasing my teammates and playing with them.

If I look back at my whole career there have been ups and downs… even very ups and downs but the truth is that the only thing I will remember is that I really enjoyed myself.

I’ve been really lucky and I’m fully aware of that, so I’ve tried to make the most of it and have as much fun as possible. I think that’s the most important thing.

Enjoying yourself, having the most fun, aren’t you going to miss that? Or will you miss some things?

No, I don’t think so. As I was saying, for me the most important thing is the notion of pleasure and today I’m still enjoying it.

The last time I went to play, all I wanted to do was to win as if it was a final and the guys couldn’t believe it. They said to me “how can you still be so angry at your age” (laughs)! The truth is that I love it too much, I’m a competitor and I want to win all the time.

Then, I won’t have time to feel the lack because next year I’ll probably play with the Cergy 2 team and I’ll have exactly the same desire as when I played in Paris.

Obviously, between playing in front of 50 people and 5,000 people, I would prefer to play in front of the biggest number, but for me the motivation will always remain the same.

I’ve always had that in me, that competitive spirit, whether in life or in the other sports I’ve done. So I am anything but a loser because I will keep that no matter what. I won’t miss the rest because in the end it wasn’t important, it was just something more.

In addition to being a player, you devote part of your time to the players. You were recently re-elected as president of the SNB. What is the outcome of your first presidency and in which direction would you like to go for the next one?

We always want to change things but the truth is that things never move as fast as we would like. What I can say is that the players are more and more involved, they pay more attention and are more curious about their environment.

It’s really nothing like it was when I started. There were very few players interested in all this. All we wanted to do was perform on the field and frankly we didn’t pay much attention to anything else.

I think it’s a question of the times too.

Today, we see that young players pay more attention and are more concerned and alert. I think that’s a good thing for everyone!

Basketball only lasts for a short time and a short time for most of the players, maybe 10 to 15 years for a small part of them. That’s why you must see other things, to train, because in the end, not everything is about basketball.

So continue to inform the players in particular about the options open to them in terms of reconversion?

Exactly! We launched an event called the rookie program, which proved to us that it was important to involve professional players from a young age so that they can start their career with a maximum of tools, weapons and teachings to prepare them for possible problems.

We will continue to work in this direction. Of course, this year’s rookies will be replaced by new ones and in five- or six-years’ time these questions will become routine for the players. That’s how more and more players will try to make things happen. They will train and prepare themselves for the ups and downs of their sporting career.

They will not only think about basketball and who knows, more and more of them will be entrepreneurs, managers or others after their basketball career.

That’s all we wish for them!

Did you take the time to train during your career?

No, I didn’t anticipate that at all. I belong to a generation that didn’t care about all that. We didn’t have a “big brother” to guide us, so we went forward a bit blindly (Laughs). We made mistakes, we stumbled, but we got up and gained experience like that.

That’s why it’s important for us today to give feedback to the new generation, to enable them to avoid the pitfalls we experienced.

Finally, you mention the transmission to the new generation.

What advice would you give to a player who would hesitate to train in order to devote himself only to basketball?

Honestly, I can completely understand the desire to devote oneself only to basketball, we all went through it, especially when we were young. We have ambitions, objectives and we tend to be focused on that.

But this is far from being incompatible with training.

Sometimes getting out of your bubble, seeing what’s going on elsewhere, especially in the professional world, can be really enriching.

As players, we remain privileged workers and it’s true that for some, once their career is over, it can be a real shock.

That’s why it’s also important to be interested and to ask questions.

The SNB is also there for that. Many players send us messages and we try to be as responsive as possible.

The main thing is that they don’t hesitate and that they are aware that all questions are good to ask, no question is stupid. We won’t find it ridiculous, on the contrary. The players should not be deprived of this. I think it would be counterproductive for them and for what we are trying to do at the SNB, especially with the partnerships we are trying to set up with training organizations to support professional players.

Today, there are more or less long training courses, financial aid, notably from clubs that can help players under contract to finance their training. It is also important to remember that these steps are never lost and that the training you do today can always be used in several years to start a new professional career.

Finally, you organize a lot of basketball events, especially in Paris, is this something you plan to continue?

Of course, we are always trying to grow and to set up more and more ambitious things.

At first, I would like to continue to organize tournaments in the Paris region and then, why not, set up circuits throughout France and even reach out internationally with the participation of foreign teams.

We really want to set up bigger projects but we must not put the cart before the horse. Every year we try to improve, to gain experience and to push the cursors a little further.

The aim of these events is to rally as many people as possible around basketball. There are a lot of basketball lovers in France but they are not all in Paris. The idea would be, in the long run, to allow them to participate without having to travel too much.

We also think about them and I would like to be able to share this pleasure of playing basketball with a maximum of people.

Thank you for this exchange Amara!

We wish you every success in your future projects and in your presidency of the SNB.